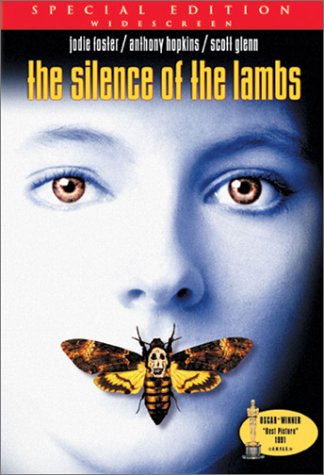 Brilliant Best Picture of 1991 that never gets old. "The Silence of the Lambs" deals with a young FBI cadet (Oscar-winner Jodie Foster) who is sent to interview a captured madman (Oscar-winner Anthony Hopkins in one of the greatest performances ever on the screen) to find out about a serial killer (Ted Levine) who is stripping the skin from his female victims after they die. The FBI has had no luck with the case and agent Scott Glenn tries to throw a curve-ball to Hopkins by sending Foster. Hopkins is a former doctor of Levine and holds the clues to capturing the unknown criminal. Needless to say the film takes many twists and turns, creating a suspenseful thriller that has no equal. At the heart of "The Silence of the Lambs" are the confrontations between Hopkins and Foster. They play a complicated chess match of words which results in some of the greatest footage ever captured for the cinema. Hopkins dominates in spite of the fact he has approximately 17 minutes of time in the film. This is a film that will wrap itself around you and you will likely never be able to shake some of the key elements you have seen in this amazing masterpiece. 5 stars out of 5.